Our Customer Spotlight this month showcases D-Day Conneaut, an annual reenactment of the June 6, 1944 invasion of Normandy that was a turning point in World War II.

The event began in 1999 among a small group of reenactors in Conneaut, Ohio. Since then, it has grown to become the largest WWII reenactment in North America, said board member Eric Montgomery,

"[It] has grown from a handful of living historians to over 1,600 who annually portray the Allied and Axis armies, navies, and air forces engaged in what is known as The Longest Day," he said.

The event draws some 45,000 spectators, he added. And since 2010, it's featured a formal program for veterans.

"The Veteran Program provides these aging heroes the opportunity to reengage with the sights and sounds of military life, share their stories, and be honored formally by generations of younger liberty loving people," Montgomery said.

Organizers first came to TJM Promos in 2011 to buy patches they could sell for fundraising. A year later they added a custom lapel pin to give to WWII and Korean War veterans who attended.

"Both the pin and patch provided meaningful and symbolic throwbacks to that pivotal moment in world history," Montgomery said.

There’s no doubt about how much those small tokens of appreciation mean to people. We'll let Mr. Montgomery tell the story from here:

"It's been 75 plus years since the end of WWII.Â  For the most part veteran recognition has been limited to a hand shake and words of thanks in passing in grocery and department stores.

Yet when these aging heroes come to D-Day Conneaut, they are given a custom made name tag affixed to a burlap gift bag filled with items that they could use at home beyond the event.Â  However, it is that veteran pin that is unique to that annual experience. 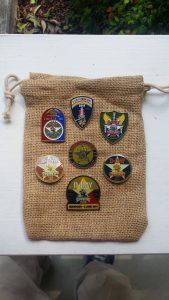 With Covid-19, and the risk too high for anyone to attend the annual event in 2020, this didn't mean that the veteran pin and event patch was cancelled too. No way. The honoring continues regardless.Â  Every WWII and Korean-era veteran that the event had information on was given instructions how they could continue the tradition of receiving one by mail.

For the past few years, the first WWII veteran who received this annual pin was Aviation Machinist Mate 3rd Class Earl Ellis of Elizabethton Tennessee.Â  Earl was a crewman aboard a Grumman Avenger, manning the ball turret gun position of the carrier based torpedo bomber. He served on the USS Lexington and USS Yorktown and earned two Distinguished Flying Crosses among other commendations for his service to our great nation.

In presenting the pin in person I could gauge the reaction of the design and the immediate effect that Earl had in receiving one. Each and every time I presented Earl a pin, he could not wait to remove the backing clasp and put that pin on his cap.

This year, things were a little bit different.

On the day I received this [2020] year's "Victory" pin, designed to commemorate the hard fought victory that everyone alive in 1945 had a part in winning, I found out that Earl was in a nearby hospital. The following day, Earl was to be discharged from that hospital and into a personal care home.

Immediate action was necessary, as with COVID-19, there was no way I could visit him within that personal care environment. Seeing the positive effects that prior presentations of the annual pin had on Earl and every veteran at the event, I knew that this one in particular would be the best yet. This special pin was just what the doctor ordered.

The isolation each and every senior citizen has had to endure during this difficult time has been as bad as the virus itself. Their daily routine just as important to overall health as their medications and a good diet, Covid put an end to Earl's daily "get out and go" mentality, and with that, his health declined.Â  I knew that seeing Earl now would most likely be my last personal contact with this American hero.

At the hospital, I told Earl that I wanted to present him this year's pin and I could see it in his eyes, the pride his actions said so plainly in previous years.Â  I removed the clasp and affixed the pin on his hospital gown and once again the immediate effect that this pin had on him was nearly indescribable. 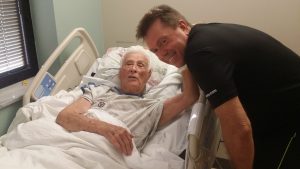 He was so appreciative in receiving something that recognized his service in WWII, a small token of appreciation for such a huge achievement. That was a moment that will stay in my memory for rest of my life. Sadly, Mr. Ellis was to pass away only a few weeks later, but his legacy will live on with the freedom and liberty we all enjoy today."

We at TJM Promos are honored to have played a small part in the commemoration of the accomplishments of Mr. Ellis and all those who served. And we thank D-Day Conneaut for their continued trust in us.

For a YouTube video of Mr. Ellis talking to Mr. Montgomery about his experiences as a ball turret gunner: https://bit.ly/2MWXe0P

(In the main photo above, Left to Right: Pilot Bill Patterson, Ball Turret Gunner Earl Ellis, Radio/Radar Operator Melvin Magruder. This was taken after landing safely on the USS Yorktown aircraft carrier. Note that the plane’s right tail stabilizer has been shot off.)