In the world of custom car designers and builders from the early days of hot rodding, few names are as revered as the late Ed "Big Daddy" Roth. A custom car designer/builder, artist, cartoonist, illustrator and pinstriper, he was instrumental in the creation of the Southern California "Kustom Kulture" automotive scene.

Roth is well known for his radical custom vehicles, including trikes, a levitating car, and one-of-a-kind hot rods of every sort. His vehicles can be seen at museums and custom car shows nationwide. He's equally well known for his classic illustrated characters. Both have even been presented as toy models.

In 1963, Roth drew his most celebrated character, Rat Fink. The reckless rodent, a true anti-Mickey Mouse, soon became an iconic representation of Roth's artistry. The character was an immediate success, and hasn't gone out of style in 60 years.

Roth passed away in 2001, at the age of 69. The following year, the Rat Fink Reunion began in Manti, Utah. It's been going strong ever since.

Ilene Roth chose TJM Promos to provide custom coins and pins for this year's 20th anniversary Rat Fink Reunion held this past June, and for the official Rat Fink Museum. 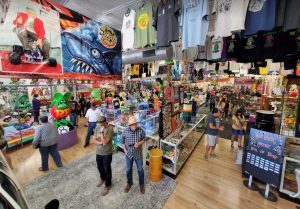 "Many want a gift from our museum that says 'Rat Fink Convention Center.' Now they can purchase one," she said. "They love it!"

She had kind words to say about dealing with TJM.

"I really have enjoyed the customer service! Love the quality!" she said.

At TJM, we're big fans of Big Daddy Roth's artistry, and we're thrilled to be trusted with playing a small role in helping continue his legacy. Thank you Ilene, and all the Rat Fink fans out there. We look forward to continuing to serve all your custom product needs!

For more information about Ed "Big Daddy" Roth and all things Rat Fink: