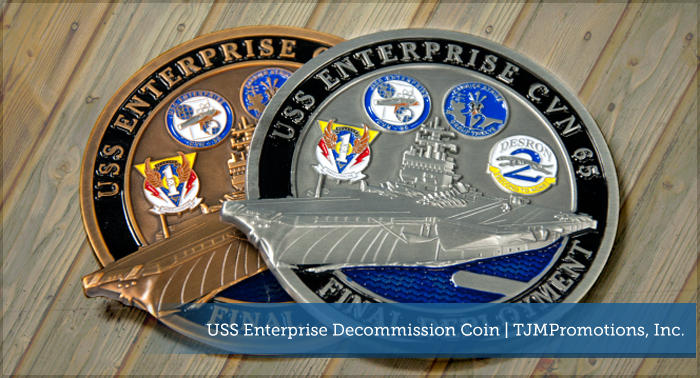 The USS Enterprise and USS Enterprise Coins have a special place in American naval history. The ship commissioned in 1961, the eighth U.S. vessel to bear the name, was the world's first nuclear-powered aircraft carrier. The "Big E" saw duty as part of the naval blockade of Cuba during the Cuban Missile Crisis. After the attacks of Sept. 11, 2001, the ship was sent to the North Arabian Sea. In all, more than 400,000 aircraft landings took place on its flight deck.

The Enterprise was inactivated in December, 2012, after more than 50 years of distinguished service to a grateful nation. We are honored that the U.S. Navy selected TJM Promotions as the supplier of custom USS Enterprise Coins to celebrate the great ship. We provided coins to commemorate the ship's final deployment.

AT TJM Promotions, we appreciate the trust placed in TJM to produce challenge coins to honor this great ship and all the brave men and women who served aboard the Enterprise.